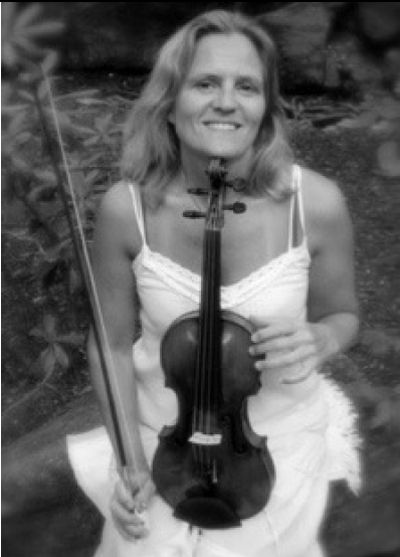 Eva Ingolf is a well known Icelandic violinist particularly recognized for her authoritative performances of solo works by J. S. Bach. She comes from a leading musical family and her father, Ingólfur Guðbrandsson, premiered many of the great choral works in Iceland and six of her sisters and brothers are professional musicians who have made an important contribution to the high quality of the musical life in the country. Eva Ingolf currently lives in New York City with her husband Kristinn Sv. Helgason, an official of the United Nations Secretariat and their daughter, Andrea Kristinsdóttir, a musician and actress. She began violin studies at a young age, gaining early recognition for outstanding musical talent, including the beautiful tone and artistic interpretation of her playing. After studying at the Conservatory of Reykjavík for 6 years, Eva left Iceland to study with some of Europe’s finest violin pedagogues. Her playing has been greatly influenced by the spirit of the Russian and East-European violin schools. At the Royal Conservatory of Brussels, she was a student of Prof. Leon-Ara, followed by studies with Prof. Corrado Romano at the Conservatory of Geneva and Prof. Istvan Parkanyi at the Sweelink Conservatory in Amsterdam During these years she won many awards, as well as scholarships to study with world renowned pedagogues such as Stephan Gheorghiu, Victor Pikaizen, Zachar Bron and Tibor Varga. Throughout her career, Eva has given numerous solo recitals in well-known concert halls in Iceland, Japan, United States, Russia and Europe, including regularly at the Hall at Carnegie Hall, the Trinity Church in New York City and the Corcoran Gallery of Art in Washington D.C., receiving high acclaim from music critics as well as the general public. She has released two highly-regarded CDs on the Japis label. Eva has also recorded for the Icelandic State Radio. In 1995-1996, she undertook studies in composition, conducting and orchestration at Harvard University.