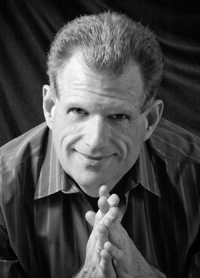 Mark Robson has been lauded by the Los Angeles Times on numerous occasions, singled out as a pianist with “one of the great techniques” and “an inquiring mind”. His career has included performance as a keyboard soloist, chamber artist, composer, conductor and vocal coach. He was a regular member of the music staff of the Los Angeles Opera from 1991 to 2005 as an assistant conductor and has worked as a musical assistant at the Salzburg and Spoleto (Italy) festivals. Mr. Robson has been on the faculties of USC, Chapman University, Cal State Fullerton and Cal Arts in the capacity of vocal coach and piano teacher. His music has been performed widely, including orchestral works premiered by the Brentwood - Westwood Symphony Orchestra and the Idyllwild Orchestra.

The theme for this Fifteen Minutes of Fame call is: The Four Elements: earth, wind, fire, water. 15 one-minute solos for piano and/or toy piano composed for Mark Robson to be premiered by him in Spring 2014 at the Brand Library & Art Center in Glendale, California for their reopening festivities.