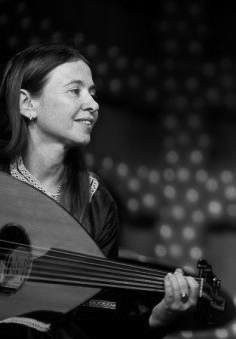 Marina Toshich was born in Sarajevo, Bosnia and Herzegovina (Yugoslavia) in1968. She became involved with music at an early age and had the unique opportunity to learn folk songs of Sarajevo's multi-ethnic cultures including Serbian, Muslim, Croatian and Jewish. After high school she left for Krakow, Poland to study at the "Jan Matejko" Art Academy where, after five years, she received a Master of Arts degree. Shortly after graduating in 1991 she went back to Sarajevo, but had to flee because of the war. She has lived in Israel for the last 15 years. During this time Marina enhanced her knowledge of Israeli folk music and Middle Eastern music at the Bar Ilan University, and further developed her art and musical skills. She graduated at "Rubin" - Jerusalem Academy of Music and Dance, at Arabic Music Department. Her compositions, in the genres of Arabic classical music are performed by "The End of the West Ensemble". Marina's first book for oud learning was published by Mel Bey in USA in 2009 in English language and the second book, also for oud & makam studying is about to be published in Chitory publications in Hebrew. She plays oud in The New Andalusian Orchestra, Ensemble Golha of Persian music, "The End of The West" and in "Gipsy Han" ensemble of world music