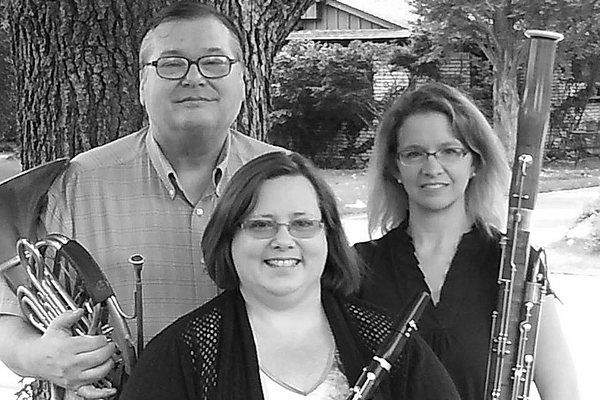 This Fifteen Minutes of Fame call for "West Winds" is inspired by the folk music of the composer's current country of residence or his/her nationality.

Dayna Smith holds a Bachelor of Music and a Masters in Business Administration degrees from Oklahoma City University , and continued her study in bassoon performance at Baylor University . A native of Lawton , Oklahoma , she has played the bassoon for over 25 years, performing in chamber groups, orchestras and professional bands. In addition to performing with the West Winds, Dayna also performs with Chamber Music of Tulsa, Starlight Bands, and Bartlesville Symphony Orchestra. Other recent performances include concerts with the Jackson Bay Quintet, Signature Symphony and the Tulsa Community College Orchestra. Dayna studied under Betty Johnson, Eric Arbiter and Dr. Kent Moore. Dayna also teaches bassoon privately in the Tulsa area.

Kristi Sturgeon holds a Bachelor of Music Education from the University of Tulsa and a Master of Music from the University of Oklahoma where she studied with Dr. David Etheridge. During her career, she has performed with many area ensembles, including the Tulsa Philharmonic, the Signature Symphony, the Starlight Band, and in various venues in the Tulsa area as a freelance musician. Since 1993, Kristi has maintained a private studio at Owasso High School . In 2000, she joined the Ft. Smith Symphony in Ft. Smith , Arkansas as the group’s bass clarinetist and can be heard playing on three of the cds the orchestra has recorded on the NAXOS label. Kristi joined the faculty of the University of Tulsa as clarinet professor in 2010. When not playing, she can be found knitting or spinning yarn, arranging and composing, gardening, or enjoying life with her husband and two sons.

For over forty year, Mark Watson has been an active horn player in the Tulsa Area. He has been a member of the Tulsa Philharmonic, the Signature Symphony and the Starlight Band. Additionally, he has performed in the pit for Tulsa Opera, Tulsa Ballet Theatre, and many Broadway shows. Other musical activities have included numerous chamber music performances, church services and the occasional big band or solo performance. When he is not playing the horn, Mark is an information systems analyst support Maintenance and Engineering Systems at the American Airlines Maintenance Base in Tulsa . He enjoys fishing and camping and his life with his wife, Margaret, and their West highland Terriers