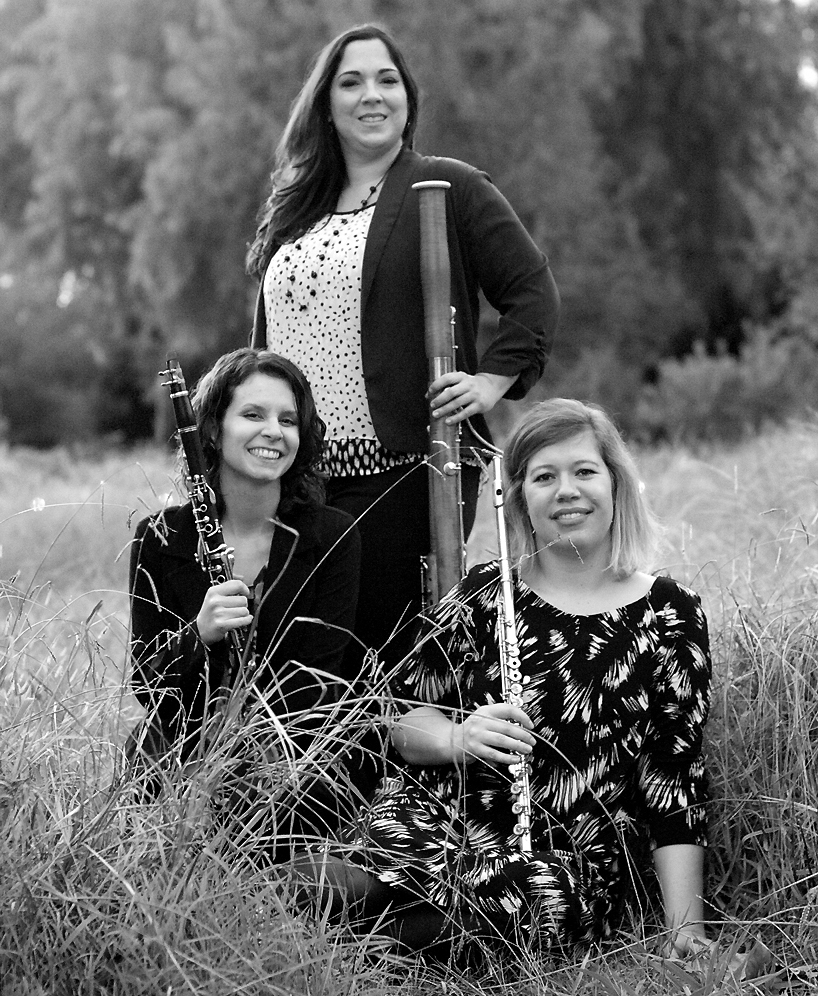 Brought together by the desire to perform unconventional music, Third Wheel is a woodwind trio unlike any other. With a repertoire spanning more than four centuries of music, Third Wheel expands the definition of chamber music with an unusual instrumentation and fresh, youthful perspective. Founded in 2007, the group is dedicated to seeking out lesser-known works by contemporary composers, and also steps outside the boundaries of classical music to perform works borrowed from jazz, folk and rock. In 2008, Third Wheel was selected by Young Artists International, in conjunction with the cities of Beverly Hills and Manhattan Beach, to appear in various Southern California music series such as Laguna Beach Live and The Previews. Third Wheel frequently performs pre-concert music for the Pacific Symphony, and has performed as guest artists at Los Angeles City College, Los Angeles Valley College, Mt. San Antonio College and Biola University and Chapman University. Highlights of some non-traditional performance venues include Live at the Lounge at the Comedy & Magic Club, intimate Contrapuntal Hall and the Huntington Library. Third Wheel was a 2010 recipient of a Seed Money Grant from New York Women Composers. In 2011, Third Wheel was the featured ensemble for the American Composers Forum-Los Angeles new composition concert. The West Coast Composers Forum featured Third Wheel in a new composition concert in 2012, and recorded an album of the same works. In 2013, Third Wheel was named a statewide finalist in the San Diego MTAC Chamber Music Competition.

Karin Kantenwein Fabiero is an orchestral performer, teacher and chamber musician. She has performed with the Orquestra Sinfonica UANL in Monterrey, Mexico, and with the American Wind Symphony Orchestra on their “Spirit of Louisiana” tour. She has also performed in the pit orchestra with the College Light Opera Company in Falmouth, Mass. Mrs. Fabiero earned a Bachelor of Music in flute performance from the University of Southern California, studying with Gary Woodward and James Walker, and she earned a Master of Music in flute performance from the University of North Texas, studying with Terri Sundberg. During her college studies, she had the opportunity to work with well-respected conductors and composers such as Robert Reynolds, Sergei Comissiona, Eugene Corporon, Anshel Brusilow, John Williams and Morten Lauridsen. While at UNT, Mrs. Fabiero performed with the esteemed North Texas Wind Symphony. She can be heard with this ensemble on Klavier Recording Project and GIA WindWorks: Poetics, Passions,Altered States and Transformations. Recently, she has performed as soloist with the Orange County Symphony, and been a substitute with Pacific Symphony and the Southeast Symphony. She is a member of the Music Teacher's Association of California and the honorary music society Pi Kappa Lambda. Mrs. Fabiero teaches at Claremont Community School of Music, Mt. San Antonio College, and Cypress College.

Dr. Rebecca Rivera enjoys an active career as a performer and educator. As a bassoon and contrabassoon player, Dr. Rivera has recorded for several film and music projects and performed with many ensembles throughout Southern California including Los Angeles Chamber Orchestra, Riverside Philharmonic, Debut Orchestra, American Youth Symphony Orchestra, Golden State Pops Orchestra,Southeast Symphony, Torrance Symphony,Westchester Symphony, Peninsula Symphony and the Pasadena Symphony and Pops Orchestras. Dr. Rivera won the Southeast Symphony concerto competition in 2001. Dr. Rivera recently performed with Elton John at the 125th Anniversary concert for Yamaha. In addition, Rebecca has performed with Wayne Shorter, recorded Jazz Ballet with Louie Bellson at Capitol Records, performed and recorded for Jackie Evancho and appeared in a Verizon commercial. Dr. Rivera has performed at Walt Disney Concert Hall, Cerritos Performing Arts Center, Dorothy Chandler Pavilion, The Orpheum and The Los Angeles Music Center. Dr. Rivera is a guest artist on a CD by flamenco latino guitarist Tony Ybarra, Fiesta. In addition to maintaining her private teaching studio, Dr. Rivera is a lecturer at the University of Southern California and teaches reed-making workshops throughout the year. Dr. Rebecca Rivera completed her Doctorate of Musical Arts degree in bassoon performance at the University of Southern California, studying with Rose Corrigan and Judith Farmer.

Clarinetist Laura Stoutenborough performs as a freelance musician throughout Southern California. She has performed with orchestras across the Southwest, including the Los Angeles Philharmonic, Santa Barbara Opera, Long Beach Opera, Las Vegas Philharmonic, Arizona Opera, and the Tucson Chamber Artists. Laura was the Principal Clarinet of the Tucson Symphony Orchestra from 2010-2013. Laura received her Doctor of Musical Arts degree from the University of Southern California in 2010, studying with Yehuda Gilad, and received her Bachelor of Music degree as a student of Burt Hara at the University of Minnesota. As a concert soloist, Laura’s performance highlights include performing Mozart’s Clarinet Concerto with the Tucson Symphony Orchestra, performing Yerusha by David Stock with the USC Contemporary Music Ensemble, and winning the 2008 concerto competition at the Music Academy of the West. Passionate about teaching, Laura has a private clarinet studio in the Los Angeles area, where her students have participated in the All-State and All-Southern honor groups, and the Pacific Symphony Youth Wind Ensemble. Laura has also given clarinet masterclasses as a guest artist for the Tucson Symphony Orchestra, at Waldorf College in Iowa, and at the University of Minnesota.