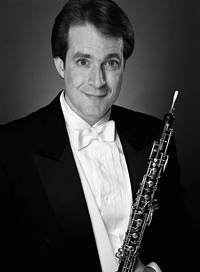 Oboist Robert Botti has performed throughout North America, South America, Europe, and Asia as an orchestral player, chamber musician, and soloist. A native of New York, he studied with Ronald Roseman and Harlold Gomberg at the Juilliard School where he received his bacherlor’s and master’s degrees. While still a student he made his solo debut with the Juilliard Orchestra performing the Richard Strauss Oboe Concerto in Alice Tully Hall. Mr. Botti joined the New York Philharmonic in 1992 after serving as Principal Oboist of the New York City Opera Orchestra and Opera Orchestra of New York. As a soloist he has performed numerous concerti including the Mozart Oboe Concerto with the New York Symphonic Ensemble. Solo recitals have included Weil Recital Hall at Carnegie Hall. Mr. Botti performs frequently throughout the season with the New York Philharmonic Ensembles in both Avery Fisher and Merkin concert halls. He performed the Tafelmusik Quartet by Telemann as a guest on Judith LeClair’s New York Legends recording. He is featured on the premiere recording of Arnold Sturm’s Suite for Oboe and Piano, and he has participated in numerous other recordings and performances with ensembles including the Orpheus Chamber Orchestra, Sylvan Winds, Philharmonia Virtuosi, New York Kammermusiker, Amadeus Ensemble, and Harmonie Ensemble. As a guest artist with Jazz at Lincoln Center he has collaborated and recorded with Gunther Schuller, Wynton Marsalis, and Joe Lovano among others. In 2003-2004 Mr. Botti was Visiting Professor of Oboe and B.A. Nugent Professor of Performance Studies at the University of Illinois. He remains on both the Woodwind Performance and Orchestral Performance faculties at the Manhattan School of Music.