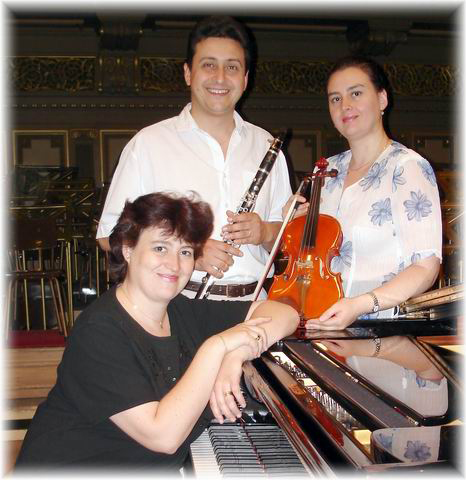 Mosaic Trio was founded in 1994 and has benefited from the guidance of cellist Wolfgang Laufer, a member of the Quartet "Fine Arts" (US). The band participated in the International Music Festival in Piatra Neamt, the "Days of Eugene Ionesco" in Slatina, and the Festival of Young Musicians in Baia Mare. Mosaic Trio participated in international chamber music competition "UFAM" in Paris and held a concert in the contest and festival "Orpheus Prijs" in Antwerp (Belgium). The activity is conducted trio concert halls both in Romania and in Europe, including the latest concert tours are found: one in Switzerland in 2009.

OANA SPÂNU-VIŞENESCU was born in 1969; she majored in violin at the National University of Music Bucharest, prof. Daniel Podlovschi in 1994, followed a year of postgraduate studies. • In the fall violinist participation in summer courses, achieving national awards - Contest "Mihail Jora" - and international - Stresa, Isola Capri (Italy). • Since 1994 works at the National University of Music Bucharest, currently the lecturer the chair of chamber music. • Between 2000 and 2002 followed a period of training at the Conservatory of Neuchatel (Switzerland) class teacher Denitsa Kazakova. Iin followed a course parallel viola with prof. Jan Dobrzlewski. • as a violist is a member of the quartet "Arioso". He has numerous appearances in concert and recital, both at home and abroad and has printing on radio, TV and CD.

DIANA SPÂNU-DĂNILĂ was born in 1966 and in 1990 she majored in musicology at the Academy of Music of cowards. • From 1990 to 1997, occupying the Choir Music assistant pianist "Gavriil Musicescu" Philharmonic "Moldova" of leave, with which participates in concerts at home and abroad. • Also, pianist Music assistant is between 1997 and 2001 at the National Operetta Theatre "Ion Dacian" Bucharest and in 2001 the Department of accompanists and music accompaniment High School "George Enescu" in Bucharest. • In addition to piano work - he held numerous concerts and recitals - carries out activity music critic by publishing reviews and articles musicology.

VIŞENESCU EMIL, born in 1969, majored in clarinet at the National University of Music Bucharest, Barbuceanu prof.Valeriu class in 1993. • In the same year a member of the Philharmonic Orchestra "George Enescu". • He attended numerous courses training under the guidance of teachers Stephan Korody, Joseph Balogh, Aurelian Octav Popa, Karl and Walter Boeykens Devster. • Between 2000 and 2002, specializing in conservatory in Biel (Switzerland) under the guidance of Professor Ernesto Molinari. • in Switzerland held concerts and recitals , the scholarship winner "Martha Moser '(2000) and" Tchumi-Preis "in 2002. • operates in concert appearances solo and chamber groups with different compositions in chamber music ensembles.

Works selected for this Fifteen Minutes of Fame include:
Cooler Heads by Daniel Arnold,
Parallel Structure by David Bohn,
Istampitta by Erik Branch,
Valse Triste by Scott Brickman,
Waiting For The Rain by Inna Buganina,
Mascara by Jean-Charles Gooden,
Quasi Brazilian by Cindi Hsu,
Three Views of a Mosaic by Laszlo Kékszakállú,
Chaconne by Douglas Madison,
Shore Breeze by Martin Neil,
When You Come Back by Yan Pang,
Aglutinación by Juan Maria Solare,
Scorpio by José Jesus de Azevedo Souza,
Cherry Street by Max Stannard, and
Clouding of Logic by Chace Williams