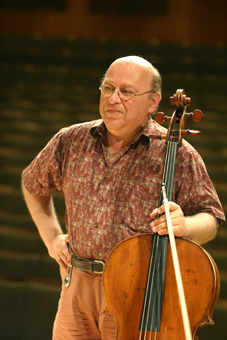 Mirel Iancovici, cellist, teacher, composer, arranger and conductor, was born in Romania. After studying under Serafim Antropov in Bucharest Conservatory and completing with Radu Aldulescu and Paul Tortelier, he won many important international competitions such as: "Gaspar Cassado" Florence, Italy - the First Prize and several special prizes; "Imperial Tobacco Cello Competition" Bristol, U.K. - the First Prize and Gold Medal; "Pablo Casals Centenary" Barcelona, Spain - the First Prize. Since then his concert and recital schedule has commanded extensive travel throughout Europe, the United States and Far East as well Radio/TV recordings and records for Electrecord, Attacca, Albany etc. From 1997 he is the artistic director of ’Schubert & Co.’’ Chamber Music Concert Series in Maastricht (Netherlands) and the founder and leader of I Multicelli.

As a passionate advocate and promoter of contemporary music Mirel Iancovici has created many compositions written and dedicated to him by distinguished composers from all of the world.

Mirel Iancovici, a much saught-after teacher and educator, is currently Professor of Violoncello at the Maastricht and Fontys Conservatory (Holland) and has given master classes in France, Germany, Italy, Ireland, Holland, Poland, Romania, USA and South Korea.