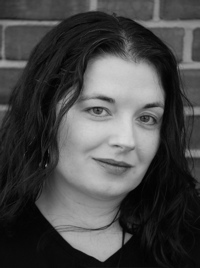 Michelle McQuade Dewhirst received a BM in horn performance from Ithaca College and completed the A.M. and Ph.D. in music composition at the University of Chicago. Her principal composition teachers have been Shulamit Ran, Marta Ptaszynska, Greg Woodward and Dana Wilson. Her music has been performed at numerous festivals and conferences,including a Summer 2007 residency as an Associate Artist at the Atlantic Center of the Arts. Michelle's work has been performed by such ensembles as the St. Paul Chamber Orchestra, the Pacifica String Quartet, eighth blackbird and the New York Miniaturist Ensemble. Her work "sky is falling in" for flute, horn and percussion was recently released by horn player Kent Leslie on his CD With every leaf, a miracle. She has taught at the University of Chicago, Oberlin Conservatory and ConcordiaUniversity (River Forest, IL), Daley College in Chicago, and is currently Assistant Professor of Music at UW-Green Bay where she primarily teaches music theory and history. Michelle is a founding member of the Chicago Miniaturist Ensemble and "a very small consortium" (www.very-small.org) and has received the ASCAPlus Grant numerous times. Her work is published by JOMAR Press.

Vox Novus is calling for one-minute pieces composed for 15-Minutes-of-Fame: Michelle McQuade Dewhirst, horn in F to be performed at the March 11, 2012 Composer's Voice concert in New York City. This concert is to celebrate Women's History Month and targetted to women composers. The one-minute solo horn pieces are to be written specifically for this project, which will be performed by horn player and composer Michelle McQuade Dewhirst. All works must be 60 seconds or less. Extended techniques for horn are strongly encouraged.