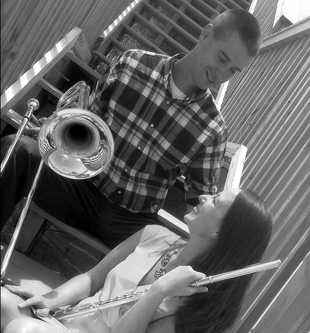 Trombonist Patrick Reynolds has served in the U.S. Navy since 2009. Currently a Second Class Petty Officer stationed in Norfolk, Virginia, he performs with the U.S. Fleet Forces Band Brass Quintet, Wind Ensemble, and the Brass Band "Uncharted Waters." In 2015, Patrick served aboard the USNS Comfort as a part of the Continuing Promise humanitarian mission, during which he performed throughout the Caribbean and Central and South America. Prior to Virginia, Patrick was stationed in Chicago, Illinois with Navy Band Great Lakes where he was featured as a soloist performing Arthur Pryor's Blue Bells of Scotland with the Wind Ensemble. He performed actively throughout the Midwest as a member of the “Brass Ambassadors,” the Navy Band Great Lakes Brass Quintet. During his time with the U.S. Navy, Patrick has performed in Belize, Canada, Panama, El Salvador, Argentina, Guatemala, Nicaragua, Honduras, Dominican Republic, Haiti, Dominica, Jamaica, and Colombia. He has also instructed masterclasses and clinics in a number of these countries.

As an orchestral musician, Patrick held the assistant principal/second trombone position with the Dubuque Symphony Orchestra, where he also served as acting principal trombone during the 2011-2012 season. Additionally, he has performed with the Dayton Philharmonic and Waterloo-Cedar Falls Symphony Orchestras. Patrick was a featured soloist with the Austin Peay Symphony Orchestra performing Lars Erik-Larsson's Concertino.

Patrick holds a Master of Music degree from the Cincinnati College-Conservatory of Music and a Bachelor of Music degree from Austin Peay State University. He studied with Susan Smith, assistant principal trombone of the Nashville Symphony Orchestra and Tim Anderson, principal trombone of the Dayton Philharmonic Orchestra. Patrick can be heard performing on the Bill Shepherd Big Band album Christmas in Cedar Falls.

Angela Collier-Reynolds is Adjunct Flute Professor at Fairmont State University and flutist with the Gateway Chamber Orchestra in Tennessee. Her playing has been praised as “the most beautiful flute voice in perhaps decades” and “this woman’s playing is personal…people don’t know how to feel after being taken to such emotional depths.”

Angela is pursuing a Doctorate of Musical Arts in Flute Performance at West Virginia University where she is the graduate assistant to the flute studio and performs as a member of the WVU Graduate Wind Quintet. She has been a prize winner in the Mid-South Flute Society's Young Artist Competition, Sigma Alpha Iota Graduate Performance Awards competition and has been featured in recital at National Conventions in Orlando, FL, Chicago, IL, and St. Louis, MO. Angela held the 3rd flute/piccolo position with the Skokie Valley Symphony and has performed with the Evanston Symphony, Fayetteville Symphony, Chicago Vintage Brass Band, and new music ensemble Fonema Consort in Chicago, IL. She has been featured as a soloist with the Northern Iowa Symphony and Austin Peay Symphony Orchestras. Angela was recently a guest with the Vox Novus: Composer’s Voice Concert Series in New York City and will be the featured guest artist in an August 2016 recital for Music at the Monastery: Summer Concert Series in Pittsburgh, PA.

As an advocate of new music, Angela has premiered numerous works and is currently collaborating with composer Benjamin Cornelius-Bates to commission a series of new pieces for flute. A Clarksville, TN native, Angela completed a Bachelor of Music degree in Performance and Education at Austin Peay State University and Master of Music degree in Flute Performance at the University of Northern Iowa. Her primary teachers include Angeleita Floyd, Nina Assimakopoulos, and Lisa Wolynec. Angela can be heard performing on the Delos Label with cellist Michael Samis and the Gateway Chamber Orchestra.