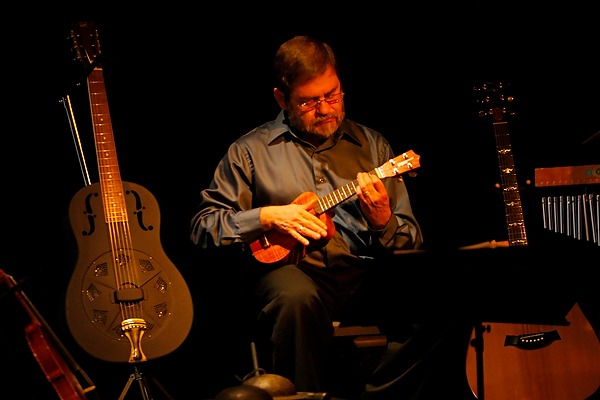 A native of Chicago, Alex Lubet (b. 1954) is a multi-instrumentalist, composer, author, and teacher, and head of the composition program at the University of Minnesota. Mostly self-taught on his instruments, he was much inspired by two guitar teachers, Don Smith and Donald Stark, who encouraged his interests in improvisation and a diversity of musical styles and cultures. He holds degrees in music composition from Chicago Musical College (now Chicago College of Performing Arts) and the University of Iowa. He has lived in Minnesota since 1979.

Lubet specializes in string instruments, in particular a variety of guitars, basses, and ukuleles. He is best known as an acoustic guitarist, for which he has developed numerous extended techniques, notably a much-expanded range of natural harmonics and multiphonics that permit chords of up to twenty notes. A performer of both composed and improvised music, he plays solo and also frequently collaborates with Serbian classical guitarist Maja Radovanlija, Swiss jazz pianist Guerino Mazzola, and Japanese-American taiko (percussion) and fue (flute) player (and his wife) Iris Shiraishi. Most recently, Lubet has expanded his performance and cultural background by having received certification in traditional Korean music from the National Gugak Center, in Seoul, South Korea, where he studied changgo (drum), danso (flute), and pansori (Korean opera).

Although his repertoire is principally his own compositions, Lubet actively solicits new works by composers interested in learning his unique sonic vocabulary. His album Spectral Blues: New Music for Acoustic Guitar has received numerous enthusiastic reviews and was listed among the "Best Albums of 2013 (in any genre)" by noted critic Ted Gioia. He has recently recorded The Enchanted Guitar Forest, an album of guitar duos with Maja Radovanlija, comprised of their original works, which they are currently touring.

Works selected for this Fifteen Minutes of Fame include:
Sketch for Alex by Jay Afrisando,
Guitar Etude by Nathaniel A. Akers,
Conjunction by James T. Connolly,
Púca by Jim Dalton,
Prelude to the Unknowable by Douglas DaSilva,
Bhavana by Gordon Fitzell,
Counterpoint Study :: 10II15.1740 by Diarmid Flatley,
February by James E. Holdman,
Aria in D by Alex Lubet,
Snow on Selby Avenue by Liam Moore,
Through the Green of the Forest by Yan Pang,
Chinese Whiskey by Zack Pentecost,
A Very Spacial G by Etienne Rolin,
All-Inclusive by Justin Rosin, and
In a Brazilian Forest by Bob Siebert