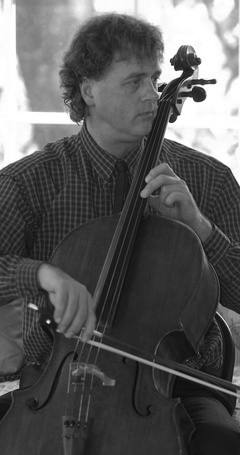 For several decades, cellist Craig Hultgren has been a fixture on the scenes for new music, the newly creative arts, and the avant-garde. In recent years, he has performed solo concerts and chamber music in Rome, New York, Boston, St. Louis, Pittsburgh, Miami, Atlanta, Orlando, Denver, Nashville, Memphis and San Antonio. A recipient of two Artist Fellowships from the Alabama State Council on the Arts, he was a member for many years of Thámyris, a contemporary chamber music ensemble in Atlanta. A cellist in the Alabama Symphony, he also plays in Luna Nova, a new music ensemble with a large repertoire of performances available as podcast downloads on iTunes. Hultgren is featured in three solo CD recordings including The Electro-Acoustic Cello Book on Living Artist Recordings. For ten years, he produced the Hultgren Solo Cello Works Biennial, an international competition that highlighted the best new compositions for the instrument. He teaches at the University of Alabama at Birmingham, the Alabama School of Fine Arts and Birmingham-Southern College where he directed the BSC New Music Ensemble. He is a founding member and current President of the Birmingham Art Music Alliance and is on the Board of Directors of the Metropolitan Youth Orchestras of Birmingham. Hultgren recently completed a CAMA artist residency (Collaborating Artists Manifesting Adventure) with the St. Louis New Music Circle where he presented programs for the last three seasons. This year, he performed a 15 Minutes of Fame concert titled Occupy Cello in New York for the Composer's Voice Concert Series. The program will featured 15 one-minute solo compositions that challenge the traditional boundaries of the instrument.