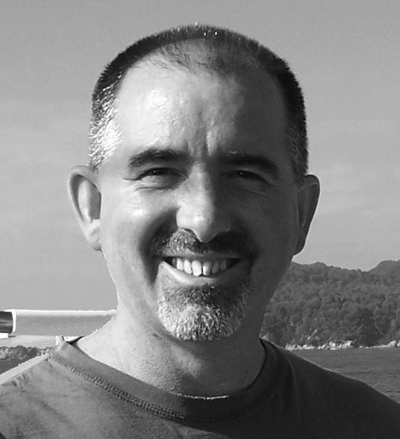 Ronald Keith Parks, born in Waynesville, NC, is an active composer of acoustic and electronic music. His diverse output includes large orchestral works, instrumental and vocal chamber music, choral music, electroacoustic music, and interactive computer music. Recent commissions include Alhambra Tiles for the Out of Bounds Ensemble, I thought I'd better let you know for the Charlotte Symphony's Orchestra on Campus Composers Project, Things Get Out of Hand… for the Out of Bounds Ensemble, A Matter of Perspective for Duo XXI, Off on a Tangent… for the Red Clay Saxophone Quartet, Torque, Wavelength and Afterimage 8 for the Charlotte Civic Orchestra, Afterimage 7 for the NeXT Ens, and …drift… for the Force of Nature artist exchange program.

Parks has written for numerous prominent performers and ensembles including the Out of Bounds Ensemble, Duo XXI, Red Clay Saxophone Quartet, the Charlotte Civic Orchestra, the NeXT Ens, the North Carolina School of the Arts Orchestra, the International Music Program Chamber Ensemble, the North Carolina School of the Arts String Orchestra, The Georgia Contemporary Ensemble, the Sally Fouse Flute Quartet, the Winthrop Guitar Ensemble, pianist Tomoko Deguchi, the Bradner-Deguchi piano duo, the Winthrop Chamber Wind Ensemble, guitarist L.H. Dickert, flutist Jill O'Neil, and many others. His compositions and papers have been selected for inclusion at numerous national and international festivals and conferences including the Malgrat del Mar International Music Festival, Society of Composers' national and regional conferences, the Florida Electroacoustic Music Festival, the Society for Electroacoustic Music in the United States conference, the International Computer Music Conference, the Electronic Music Midwest Festival, the Spark Festival, the National Flute Association conference, the New West Electroacoustic Music Festival, the Australian Flute Festival, the The Two-Sided Triangle concert series in Essen Germany, the NextWave~ festival in Melbourne Australia, the Earfest and Computer Music at SUNY Stony Brook series, the Unbalanced Connection concerts at the University of Florida, the Timara Faculty and Guests Concert series at Oberlin College, Southeastern Composers' League concerts, the College Music Society composers' concerts and numerous performers' and composers' concert recitals around the world. Dr. Parks' research into granular sampling, granular synthesis methods, and FFT-based spectral filtering is included in the Amsterdam Catalogue of Csound Computer Instruments and has been featured at ICMC, SEAMUS, SCI, and various other conferences and professional venues and has been published in various conference proceedings.

His honors and awards include the Aaron Copland Award, the Outstanding Junior Professor Award at Winthrop University, the South Carolina Music Teacher's Association Commission, Honorable Mentions in the Truman State/MACRO Composition Contest, the Minnesota Composers Forum, and the Shepard Composer of the Year Award, two Giannini Scholarships for Music Composition plus the Chancellor's Award for Excellence at the North Carolina School of the Arts, and three Graeffe Memorial Scholarships for Composition and the Presidential Recognition Award at the University of Florida. His flute quartet "Counterparts" was selected as the set piece for the 11th annual Australian Flute Festival quartet competition. He was commissioned by the North Carolina School of the Arts' International Music Program to write a work for their European tour and was awarded a grant from the Semans Creative Arts Foundation for the composition of an orchestral work that was premiered by the North Carolina School of the Arts Orchestra. He has received a Meet the Composer grant and in was nominated and elected to the Gamma Zeta Chapter of Pi Kappa Lambda, a national honor society for musicians, and is an honorary member of Phi Mu Alpha. His music is available on the Electronic Music Foundation label (CD 031), the 2005 and 2006 60X60 CDs, and the Society of Composers, Inc. Student Chapter CD Volume 1 from the University of Florida. Forthcoming releases include Masterworks of the New Era Volume 17 and an upcoming Duo XXI release on Albany Records.