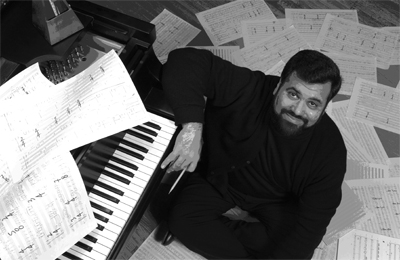 His music has been described as "rich...powerful..." having "...remarkable substance..." as well as "...lively...attractive, kinetic and...intriguing" by the Atlanta Journal-Constitution; as "...fresh and exhilarating..." by The Nashville Scene; as "...compelling...deeply evocative music...well worth exploring..." by the Georgia Music News and as "ambitious...sophisticated" and "...a reflection of the current mix of styles and aesthetic postures" by the New York based magazine, The New Music Connoisseur. The premiere of his work, Waltzing through the Endtime, was hailed as one of the best classical music events of 2005 by the Atlanta Journal-Constitution and his activities were also cited in the April 2004 issue of GRAMOPHONE magazine. Of his CD, Aegean Counterpoint, MusicWeb International notes, "[Demos'] music is emotionally direct and powerful, full of tonal complexity and structural sophistication without ever running the risk of being merely clever... Demos is certainly a composer whose ears are open to many different musical idioms, but who is able to synthesize them into coherent music of a distinctive kind."

Demos has received performances by the Cleveland Orchestra, Philadelphia Orchestra, Orchestra of St. Luke’s, Nashville Symphony, Cincinnati Symphony Orchestra, Colorado Springs Symphony, Oregon Symphony and the New World Symphony among others. His works for wind ensemble have been performed by the U.S. Army Band, "Pershing’s Own" and the Conservatorio de Música de Puerto Rico Symphonic Band among others. His chamber works have been performed by North/South Consonance, Thamyris New Music Ensemble, Bent Frequency, Sonic Generator, the Atlanta Chamber Players and the neoPhonia New Music Ensemble among others. His commissions include works for the Cleveland Orchestra, Nashville Chamber Orchestra, Atlanta Community Orchestra, the Atlanta Chamber Players, the Georgia Music Teachers Association and the National Association of College Wind & Percussion Instructors.

He is the recipient of numerous grants and awards including Grand Prize in the 2004 Millennium Arts International Competition for Composers, Grand Prize in the 2005 Holyoke Civic Symphony Composition Competition and 12 ASCAP Awards among others. Demos’ works have been programmed at festivals, symposia and conferences including the 43rd Dimitria Festival (Thessaloniki, Greece); the 18th International review of Composers (Belgrade Serbia); the International Festival – Institute at Round Top (TX); the Ernest Bloch Music Festival (Newport, OR): the New Music Forum Festival of Contemporary Music (San Francisco, CA); the Annual New Music & Art Festival (Bowling Green State University); and the Biennial Festival of New Music as well as at National and Regional Meetings of the College Music Society and the Society of Composers, Inc. His music is published by Lauren Keiser Music Publishing, recorded on the MSR Classics label, Capstone Records and has also been broadcast on WABE-FM 90.1 (Atlanta NPR affiliate), Georgia Public Radio and Internet Radio sites such as the American Music Center's CounterStream among others.

Demos currently holds the positions of Professor of Composition and Coordinator of Composition Studies at the Georgia State University School of Music. He is also the Founder and Artistic Director of the neoPhonía New Music Ensemble, the Director of the Center for Hellenic Studies in the College of Arts & Sciences and holder of the Andrew C. and Eula C. Family Founding Chair in Contemporary Greek Studies. Outside of his work at Georgia State University, he currently serves on the Executive Committee of the Society of Composers, Inc. (SCI) and was a Co-Founder of Bent Frequency, a professional contemporary music ensemble based in Atlanta, where he served as Composer-In-Residence and Artistic Board member from 2003-2008. He also serves as the Musical Director for the Greek Islanders, an ethnic ensemble he founded in 1982 specializing in Greek folk music.

Dr. Price is currently assistant professor of music at the University of Alabama at Birmingham (UAB) and serves as coordinator of composition for the Alabama Music Teachers Association.