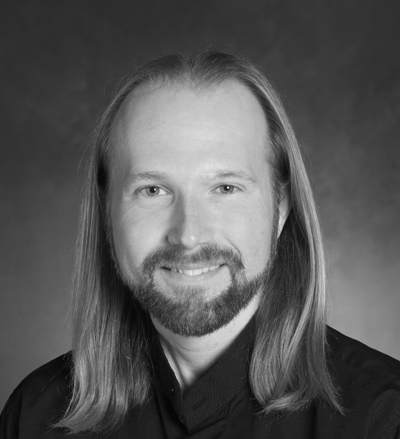 Nicholas S. Omiccioli (b. 1982) is currently a doctoral student at the University of Missouri-Kansas City where he is a Preparing Future Faculty Fellow. During his time at UMKC he has been coordinator of the Composers in the Schools (CITS) program and assistant director of Musica Nova, UMKC's new music ensemble. Mr. Omiccioli currently studies composition with James Mobberley, Chen Yi, Paul Rudy, and Zhou Long. He has previously studied with Joăo Pedro Oliveira and Brian Bevelander. Mr. Omiccioli has received many awards and honors including a commission by the 2010 Wellesley Composers' Conference, winner and judge's choice in the 2007, 2008, 2009, and 2010 UMKC Chamber Music Composition Competitions, 2009 DuoSolo Emerging Composer Award, Kansas City Chorale Crescendo Competition, Brian M. Israel Prize, and a composition grant by Mu Phi Epsilon to name a few. Just recently, Mr. Omiccioli was nominated for an award by the American Academy of Arts and Letters, a winner of the ASCAP Foundation's 2010 Morton Gould Young Composer Awards, and a finalist in the Thailand International Composers Competition. His music has been performed by DuoSolo, the Kansas City Chorale, Contemporaneous, The Wellesley Composers' Conference, members of Brave New Works, the Society for New Music, and various new music festivals around the country including Regional and National College Music Society Conferences and numerous SCI Conferences at the National, National Student, and Regional levels. In addition to composition, Mr. Omiccioli studies guitar with Douglas Niedt and teaches at the UMKC Academy of Music and Dance and the Kansas City School of Music.