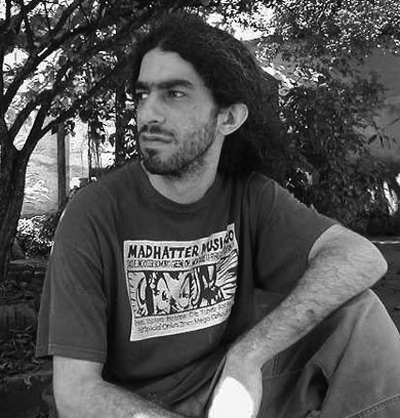 Martin Herraiz was born in 1980 and began his musical studies at the age of 10. Mostly self-taught as a composer, he was a finalist at Brazil's 1st National Contest of Concert Band Arrangements (Tatuí, 2000), at the Stockhausen/AcidPlanet electronic composition contest (2003), and at the Nieuw Ensemble/BAMdialogue Brazilian Composers’ Competition (Holland, 2009). His compositions have been performed in several Brazilian cities, as well as in the United States, Europe, and Argentina. He directed from 2003 to 2005 the music company MEFISTO, and has also performed in several other projects related to experimental and microtonal music. He co-organized in 2007 the 5th National Composers Meeting (ENCUn), which took place in Săo Paulo over a week of concerts (including dozens of premieres), workshops and roundtables, among other activities. In 2008 he co-produced the Sonâncias ensemble's debut CD Ressonâncias, featuring works by 10 living brazilian composers, including his own misantrópicos I, especially written for the project. In 2009, zonder titel was premiered in The Hague (Holland) by the Nieuw Ensemble of Amsterdam under conductor Celso Antunes, with whom he had the opportunity to work from the very first rehearsal. In 2010, he organized the first Brazilian performance of the 60x60 project in Săo Paulo, including his piece Migraine Impromptu. That same year, he wrote, produced and directed his first music theater play, um escarro na manhă (“a sputum in the morning”), commissioned for the Conexőes Sonoras (“sonic connections”) exhibition in Săo Paulo. He works since 2007 as a music transcriber and editor for Presto (www.presto.mus.br). He holds a bachelor's degree in graphic design and has recently earned his master’s/DMA in musicology at the Săo Paulo State University (UNESP) with a dissertation on Frank Zappa's orchestral music.