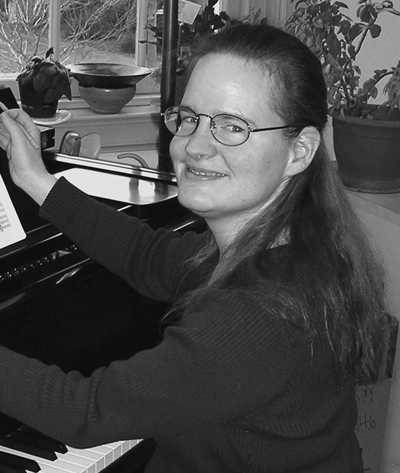 Lynn Gumert is a composer/arranger, performer, and conductor. She earned her master’s and doctorate in music composition from Indiana University-Bloomington, where she studied with Claude Baker, Eugene O'Brien, and Don Freund. She has participated in master classes with Ellen Taafe Zwilich, Shulamit Ran, and Ladislav Kubik.

Her compositions have been performed in the U.S., South America, and Europe, including performances by the Contemporary Music Forum in Washington, D.C., the Festival of Women Composers International, Society of Composers Regional Conferences, the Midwest Composers Symposium in Oberlin, and the Seventh International Alliance of Women in Music Concert. She has received commissions for vocal, choral, early music ensemble, and guitar compositions. She was awarded an orchestral reading session by the Bay Area Women's Philharmonic and a broadcast on the nationally syndicated public radio program Harmonia.

Recent commissions include Exile, based on multicultural texts about immigration and exile, and Roundabout a musico-dramatic piece for trombone duet and chamber ensemble. She has written songs and incidental music for theatre productions, as well as the musical Helen and Teacher, which was premiered in Gettysburg in June 2009. She was named as the 2008 Louis Dreyfus Foundation Fellow by the Millay Colony for the Arts and was awarded a residency at UCross Artist Colony for April 2010.

She has worked with Artist in Education programs in New Jersey and Pennsylvania, teaching composition workshops as well as workshops on Latin American, Sephardic, and Spanish music. Most recently, she was Composer-in-Residence for the Lincoln Intermediate Unit summer school program for children of migrants, located in Adams County, PA.

A vocalist and recorder player, she is Artistic Director of central Pennsylvania’s Zorzal Music Ensemble, which recently released its debut CD, Crossroads/Encrucijadas, integrating contemporary compositions and arrangements with colonial-period Latin American music, Sephardic music, and Latin American folk music. She has presented lecture-recitals on aspects of colonial-period Latin American music at the College Music Society International Conference in Costa Rica and at the Seventh International Festival of Women Composers in Pittsburgh.