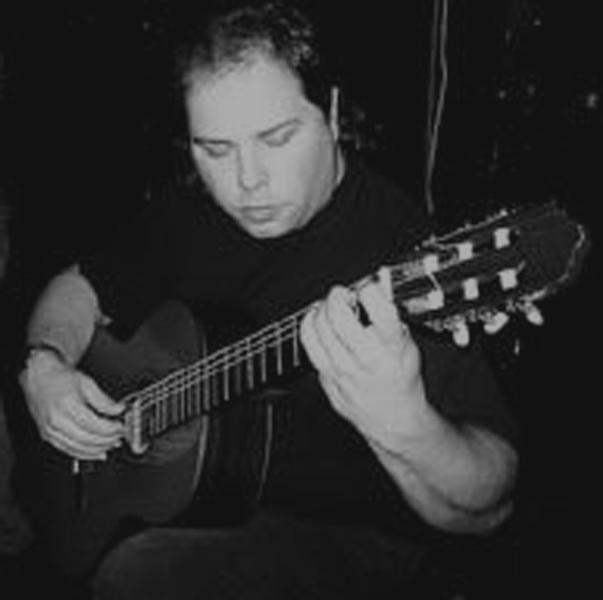 Joel David Hickman was born in Valparaiso, Indiana and currently lives in Hebron, Indiana. Joel has many years of composing, performing, and recording in various classical and rock ensembles. He has written many compositions for solo guitar and piano as well as compositions for various acoustic and electric ensembles and other solo instruments in the classical style. He is currently composing works for microtonal instruments and has been working/studing in different temperaments for various string and keyboard instruments. Joel has a Bachelor’s Degree in Musical Performance (Classical Guitar) from Chicago Musical College of Roosevelt University and a certificate in recording engineering from The Recording Workshop in Chillicothe, Ohio. He studied classical guitar with Paul Henry and composition with Robert Lombardo at Chicago Musical College. He plans on continuing his education and will be working on his Master’s Degree in the near future. He has been teaching music privately for over 18 years and at Chantal’s Music Institute for children in Valparaiso, Indiana for over 9 years instructing guitar and piano. He taught classical guitar, basic guitar, and bass at Concordia University in River Forest, Illinois and has many private students in different styles and instruments in the Northwestern Indiana area. He also has instruction in piano, violin and trombone. He started playing and performing music at the age of 10 and played the recorder and trombone in Lowell public schools. He started playing the guitar. bass, and piano at the age of 16 and was in many various progressive rock ensembles at this time. Joel is currently in the progressive rock ensemble “Dalet-Yod” where he performs and composes on the guitar, bass, and baritone guitar. In 1992, he met Steve Piscione and formed a rock band called “Project Arakus” They composed and performed songs and made a demo tape. Joel and Steve went on to different ensembles. In early 2000, Steve asked Joel to join “Dalet-Yod” and he performed on the disc, ‘From The Hands Of Lilith’ which was released on Seraph Records in Chicago, Illinois on September 1, 2001. Joel and Steve have also performed and recorded in a progressive acoustic guitar duo called “Nylon Steel”. They have two self-released CDs so far in this project. Joel is also in a progressive/experimental classical project with Mike Pancini simply called “The Hickman/Pancini Project”. On their first CD release “Voyaging Clockwise Off The Symboled Harbour” (2002), Joel performed and composed on the piano and Mike performed and composed on the violin. They are working on new compositions. They will be performing their newest compositions at weddings and other places that will have them perform. Joel has been composing and recording for the classical guitar/piano and other instruments and plans on releasing solo works in the near future. Joel has also worked with other ensembles The Wandering Jews which they had performances in 2007 in Indiana and Illinois and recorded with Harry Unsworth and James Cooper in 2009 and has recorded with Stan Roy Scott on comedy prose in a variety of situations in the last 5 years. Joel’s music will be featured in a upcoming film by Cameron Scott called “Post Mortem, America 2021?

He has had his recordings performed on 60X60. A group of composers -60 seconds- 60 composers where they have their various compositions played in different locations throughout the world.