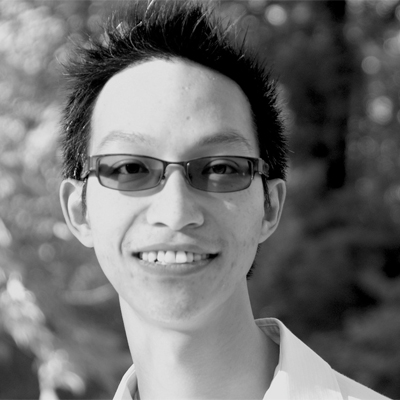 Jerry (Chiwei) Hui has written a wide variety of music that ranges from large-scale orchestral music to light-hearted choral text settings. His music has been performed in festivals such as the Music Today Festival in Eugene, Oregon Bach Festival Composers Symposium, and Society of Composers conferences (regional and national). His choral piece Of Water & Love was awarded the 2008 Robert Helps Prize. His orchestral compositions have won the University of Wisconsin-Madison Concerto Competition twice. Erythros: Four Variations in Red, his first half-evening multimedia work, was premiered in March 2007 at the University of Oregon, funded partially by the University of Oregon Graduate Research Award.

As a conductor, Mr. Hui has founded and directed various community choirs, church choirs, and orchestras. He was the founder, director and conductor of Eugene Contemporary Chamber Ensemble in Eugene, OR, focusing on contemporary music, with a repertoire that included Schoenberg’s Pierrot lunaire, Webern’s Concerto, Adams’ Gnarly Buttons, Stravinsky’s The Soldier’s Tale, and works by student composers. He had also appeared in the Eugene Symphony concert in October 2005 as an assistant choral conductor, in Holst’s The Planets. He is active in conducting for fellow composers, and has premiered over 20 new works in the past three years. This year, Mr. Hui will establish and co-direct the NEW MUSE ensemble, presenting contemporary music in venue-specific programs, funded by the Yamaha In-Residence Fellowship.

Jerry Hui is active as a performer, primarily singing in small vocal ensembles and choruses, and has often appeared as a vocal soloist. Mr. Hui has sung Renaissance and contemporary music as a bass, tenor and countertenor, and is also interested in Renaissance dances and gestures. He has recently performed in the Bay Area in a production of Handel’s Clori, Tirsi e Fileno (Fileno), and a Madison production of Peter Maxwell Davies’ Eight Songs for a Mad King. He has also established Eliza’s Toyes, an early music group in Madison.