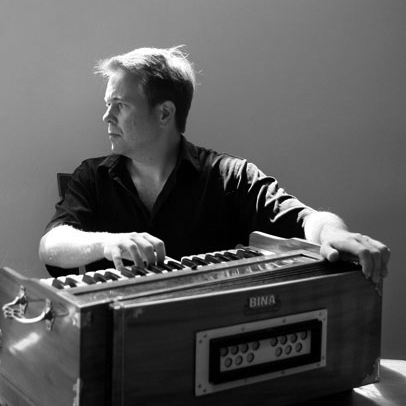 Heralded as "a star of Seattle's new music scene" by The New Yorker, Garrett’s work incorporates an eclectic mix of vocalists, movers, actors and musicians to create a music-based theatrical genre that combines ritual and myth to bridge ancient and modern traditions. Garrett has led the Fisher Ensemble since 1994, presenting 12 full length pieces in both Seattle and New York City.

Garrett’s pieces highlight the Fisher Ensemble's eclectic instrumentation – regularly employing Indian harmonium, 6 string fretted acoustic bass, gongs, Taiko percussion, and flute. The New York Times has called these operatic works as “fusions that have both a ritualistic intensity and an improvisatory freedom…a strong, unified and strikingly individual utterance of unambiguous beauty.” Each opera is a ritual that invites the audience into a mythical and archetypal world; the aim is to take the viewer through a rite of passage in which the musical, poetic and dramatic facets of the piece help elicit a new awareness.

Garrett draws inspiration from such forms as Japanese Noh theater, medieval passion plays, and ancient Greek drama. While Garrett’s projects are diverse and varied, they are united through his established link through these ancient dramatic categories and traditions. In The Passion of Saint Thomas More, he draws upon the medieval passion play form; Moon in the Bucket (1998) is inspired by the Noh theater; Dream of Zeus (2004) and Psyche (2008) draw upon ancient Greek tragedy; Stargazer (2006) is part of his historical series of compositions. Just as Noh combines a series of plays into a larger whole, he hopes to create larger works through combinations of these operas.

In creating the "blueprints" to his pieces, Garrett seeks a balance between structure and freedom to give the ensemble solid grounding with enough space to individualize the role. He weaves “ragas,” inspired by the Indian classical tradition, into his scores, and has extended this concept to "word ragas" or a general set of rules governing the creation of the libretto - to create an organic link between the composition of music and words. Each piece evolves through a series of rehearsals in which each contributor's voice is heard and incorporated into the larger whole.

In creating the pieces, Garrett places a strong emphasis on the visual component of the performance. Reversing the tradition of Western opera, where staging and design are secondary to action, the Fisher Ensemble considers masks and visual elements as integral to the structure of these operas. Throughout his music, Garrett aims to create openness that allows these visual elements to speak just as loudly as his notes.

Garrett has performed his work at On the Boards, Consolidated Works, the Nippon Kan Theater, as well as in New York at HERE Arts Center and Judson Memorial Church. He has received support from 4culture, the Allied Arts Foundation, the ASCAP Foundation/Morton Gould Young Composer Award, Bossack Heilbron Foundation, Centrum Arts Colony, City Artists, the King County Arts Commission, Puffin Foundation, the Seattle Arts Commission and the Wiggly World Foundation. His opera The Passion of Saint Thomas More was released on BIS and is included in the label's 30-CD/30-year commemorative edition.