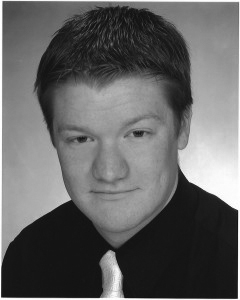 Alvez T. Barkoskie IV is a native of St. Augustine, FL and recently completed his Master of Music degree in Composition with a second concentration in Organ Performance at the University of Texas at Austin, where he studied composition with Donald Grantham, Yevgeniy Sharlat and Dan Welcher, and organ with Gerre and Judith Hancock. His composition "Pedals, Pipes and Percussion," was recently broadcasted on the Nationally Syndicated Program "Pipedreams," hosted by Michael Barone. In Fall 2012, he will attend The University of Oklahoma on a full tuition Graduate Assistantship to study for his Master of Music degree in Organ Performance.

Musical activities in the Austin area include accompanying vocalists, teaching piano, subbing at local churches and serving as Organ and Church Music Intern at St. Louis King of France Catholic Church. At St. Louis he plays organ for several masses; directs "Magnificat," an all female choir; sings in the Sanctuary choir; sings, accompanies and co-directs the all male, compline choir and plays in the handbell choir.

In May of 2009, Barkoskie graduated, with honors, from Stetson University in DeLand, Florida, where he received a Bachelor of Music degree in Organ Performance as well as in Theory and Composition. There he studied composition with Sydney Hodkinson and Manuel de Murga and studied organ and harpsichord with Boyd Jones. He also studied piano with Michael Rickman.

Upon completion of his first year at Stetson he was named a 2004-2005 Outstanding Freshmen in the School of Music. In the spring of 2007 he was accepted into the National Music Honor Society, Pi Kappa Lambda and in the spring of 2009 his choral composition "Far in the distance the majestic mountain sighs" received an Award of Excellence from the Stetson University Touchstone 2009 Literary Journal.