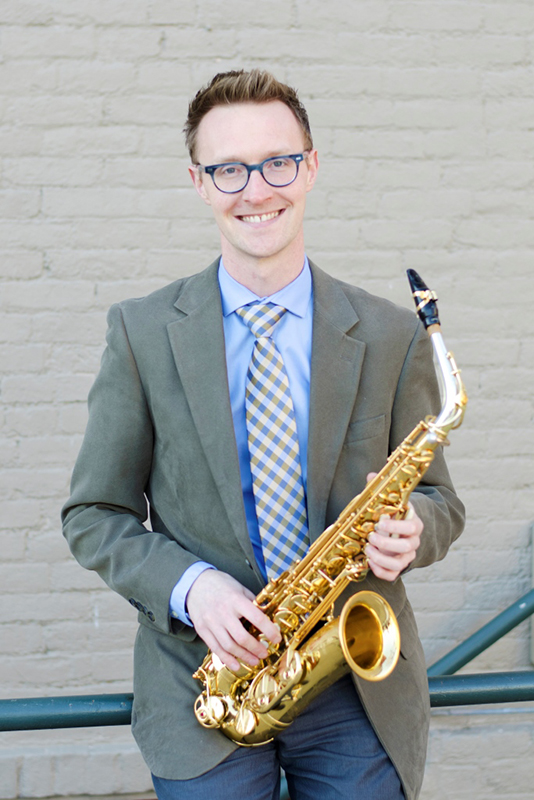 Saxophonist Drew Whiting leads a multifaceted career as an educator, performer, and scholar. His diverse musical interests include the standard concert saxophone repertoire, jazz, transcriptions of borrowed works, commissioning new works, and improvisation. Drew is an accomplished chamber musician, having been awarded first place at the 2012 MTNA National Chamber Music Competition as a member of the Cerulean Saxophone Quartet. He currently performs with a variety of ensembles including the Coalescent Quartet, Water City Jazz Orchestra, Big Band Reunion, and Wisconsin Chamber Orchestra, as well as performing frequently as a solo artist.

Drew has established himself as a champion of new and experimental music, regularly performing works from the 20th and 21st centuries in solo, chamber, and electroacoustic settings. He recently performed at the Toronto International Electroacoustic Symposium, Ball State University Festival of New Music, Third Practice Festival, and the Navy Band Saxophone Symposium, and presented the first ever Performer-Curated Concert at the 2017 SEAMUS Conference. He has worked closely with composers such as Betsy Jolas, Erik Lund, Ed Martin, John Mayrose, and Pauline Oliveros, and has premiered over thirty works by established and emerging composers.

In addition to performing, Drew is a dedicated and vibrant educator. He has presented masterclasses at Grand Valley State University, Illinois State University, Lawrence Conservatory, Ohio State University, and Oklahoma State University, and has previously taught on the faculties of Illinois Wesleyan University and Spring Arbor University. Currently, Dr. Whiting is a member of the music faculty at the Silver Lake College and the University of Wisconsin Oshkosh where he teaches courses on music and culture, music theory, saxophone, and chamber music, and co-directs the experimental music ensemble Sounds Like Now.

Drew received his Bachelors and Masters of Music degrees from the Michigan State University College of Music where he studied with Joseph Lulloff. He earned the Doctor of Musical Arts degree at the University of Illinois Urbana-Champaign where he studied with Debra Richtmeyer. Drew is a Yamaha Performing Artist and a Vandoren Regional Artist, exclusively performing on Yamaha saxophones and Vandoren woodwind products.

Drew Whiting will be presenting the works of Spencer Arias, Alexis Bacon, Christopher Chandler, and Monte Taylor on March 13, 2021