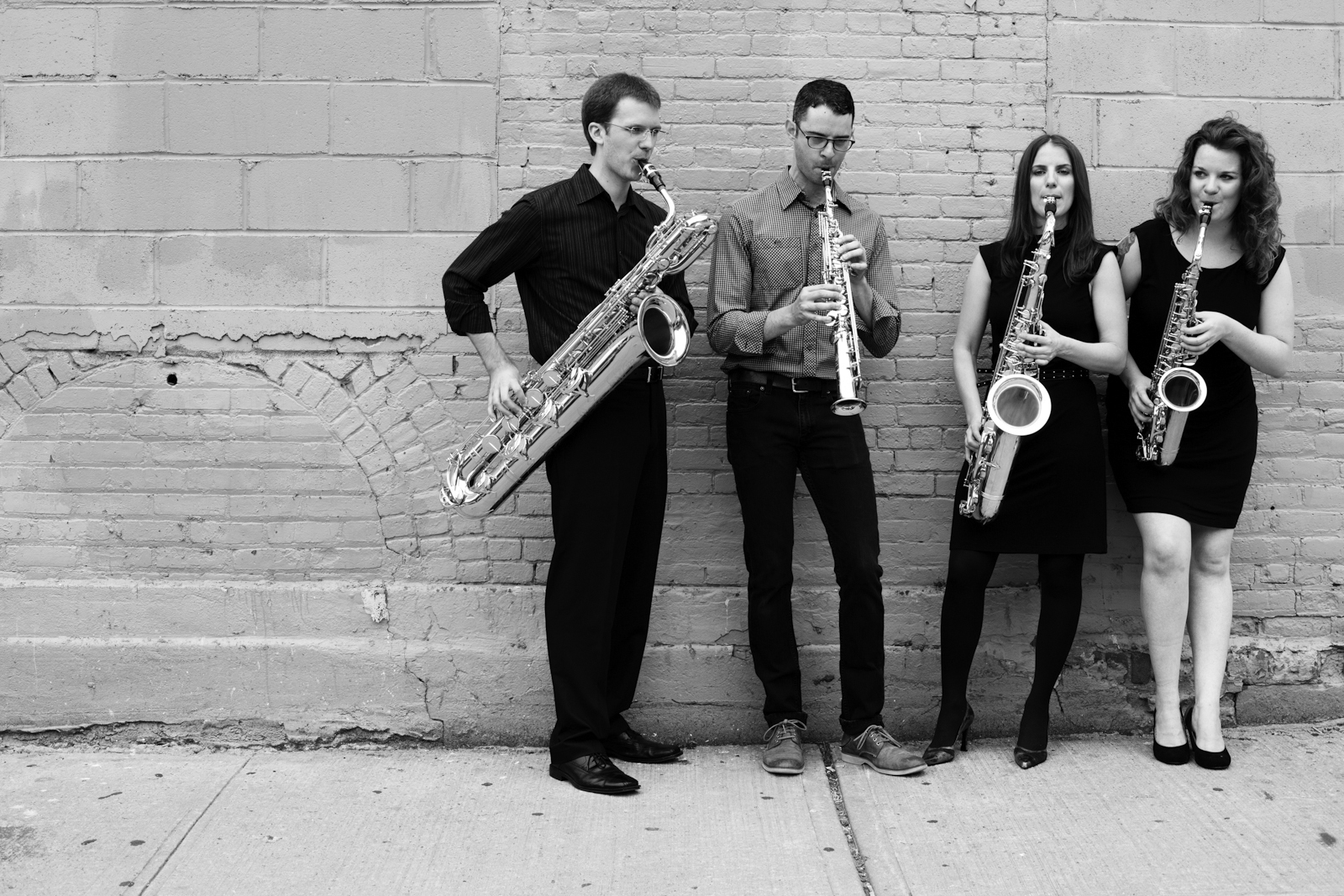 Founded in 2011, New Thread Quartet is committed to the creation and performance of saxophone quartet repertoire from New York’s burgeoning new music scene. Members of the ensemble are active as composers, performers, educators and industry professionals within the five boroughs, and share the goal of commissioning, and working closely with, New York City composers to develop impactful new works for the saxophone.

The quartet has toured widely in the US and abroad, performing at the 2012 NAVY Band Symposium in Fairfax, Virginia, the NASA Biennial Conference at Arizona State University, New England Conservatory’s Jordan Hall and internationally at the World Saxophone Congress in St. Andrews, Scotland. This spring, New Thread will perform at the University of Illinois and will premiere Erin Rogers' piece Mother Earth for flute and saxophone quartet, at Weill Hall, Carnegie Hall, with support from a JFund grant.

Geoffrey Landman is a New York City based performer, teacher, and advocate of the saxophone and new music. He has collaborated with ensembles such as Either/Or, Talea Ensemble, Boston Modern Orchestra Project, Argento New Music Project, and is a founding member and soprano chair of the New Thread Quartet.

Geoffrey has worked with composers such as Bernhard Lang, Christian Lauba, and Philippe Leroux among others. Geoffrey holds degrees from the University of Michigan (BM), University of Cincinnati College-Conservatory of Music (MM), Post-graduate work at the Musik-Akademie der Stadt Basel in Switzerland, and is currently working toward his Doctoral degree at the New England Conservatory as the first DMA candidate for saxophone performance in the school’s history.

An experienced clinician, Kristen travels throughout the U.S. giving talks on instrument accessories manufacturing for D’Addario Woodwinds, careers in music, and effective methods for collaboration with the music industry. Kristen is also a founding member of New Thread Quartet (New York, NY). New Thread Quartet is committed to the creation and performance of new music.

Erin Rogers is a Canadian saxophonist and composer based in New York City. Her works have been premiered by performers such as the Gotham Ensemble, Colin Davin, Miranda Cuckson, and the Warszynski Trio, as well as Chicago’s Anubis Quartet and Madrid’s Tribuna Sax-Ensemble. She has performed with ensembles such as IKTUS, Lost Dog Ensemble and Fireworks and is a founding member of performance groups thingNY and the New Thread Quartet. Erin completed undergraduate studies at the University of Alberta and received Masters Degrees in composition and performance from Bowling Green State University. Visit www.erinmrogers.com for more information.

Saxophonist Zach Herchen performs music ranging from classical trios to jazz tone poems, multimedia works, afrobeat, and beyond. He is a 2013 Bang on a Can Summer Festival Fellow, has worked on staff at New England Conservatory’s Summer Institute for Contemporary Performance Practice, and has performed as a soloist in Italy, Sweden, Germany, and at various American institutions. Zach holds M.M. and B.M. degrees from The Peabody Conservatory.

Composer selected for this Fifteen Minutes of Fame